Commenting on the market downturn..... 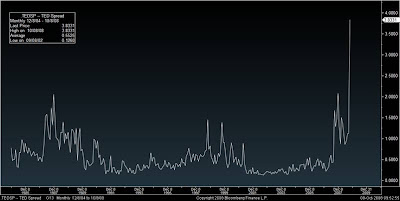 The following thoughts were shared today with a friend about the current market environment:

1) Be cautious of what is presented by the talking heads on TV. Their job is to generate viewers – don’t forget that.

2) The velocity of this equity market decline appears to be worse than the initial stages of the 1929 crash. I think the removal of the uptick rule for shorting, the unwinding of leverage (which has been taking place since July 2007) and computerized trading are among the contributing factors.

3) There is money on the sidelines waiting for the “deleveraging process” to stop. However, there could be 10-15% more downside in the S&P.

4) Patience is a critical – but scarce commodity – so don’t rush in to the market.
5) The average guy on the street thinks they understand the stock market. Most of humanity does not have a clue about the credit market (credit is more important). This market downturn is all about credit. One indicator of how well the credit markets are functioning is the TED spread (which is related to the rates banks lend money to each other). In good times, the TED spread is between 0.10% and 0.50%. Currently, it is in uncharted territory – 3.8%. The chart above presents the TED spread 1984 – present.

6) If you are heavily in the equity market – lighten up.

7) Is this going to be a depression? I having never been in one, so I don’t know. Will this be the worst economic downturn in a generation – Yes.
Posted by Paul Dravis at 5:34 PM
Email ThisBlogThis!Share to TwitterShare to FacebookShare to Pinterest