GM, the bailout and the Volt

Today, CEO Rick Wagoner of General Motors, Alan Mulally of Ford and Robert Nardelli of Chrysler testified at a hearing with the Senate Banking Committee regarding the potential for $25 billion in loans.

Notably, even before the credit crises unfolded, GM had “bet the ranch” on its Volt hybrid car. During the hearing, Mr. Wagoner did not focus on the Volt’s potential and only mentioned that it would be available sometime in the future. Perhaps the bet is not paying off. Hopefully, US taxpayers are not caught holding the bag.
Posted by Paul Dravis at 4:34 PM No comments:
Email ThisBlogThis!Share to TwitterShare to FacebookShare to Pinterest 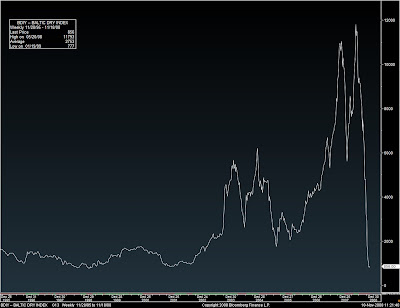 One measure of assessing global trade dynamics is the Baltic Dry Index which tracks the cost for shipping building materials, coal, crude oil, metallic ores, and grains around the world. The index is actually an average of three indexes: the Baltic Supramax, Panamax, and Capesize. (chart presents weekly performance since Nov. 1995)
The index, after reaching a high on May 21, 2008, has been significantly impacted by 1) a slowdown in global trade, 2) an oversupply of ships and 3) the challenges by shippers to obtain letters of credit.
While the aggregate index recently has stopped declining, the Capesize component continues to slowly trend lower. Capesize ships are generally associated with shipping crude oil. Additionally, some ships are been used to store, rather than ship goods. A reversal of these trends are among the metrics needed to support a positive view of the market.
Posted by Paul Dravis at 11:20 AM No comments:
Email ThisBlogThis!Share to TwitterShare to FacebookShare to Pinterest

Wisdom from a retired investment professional: 10 Market Rules to Remember

In the midst of the market turbulence, it is worthwhile to step back and consider the words of someone who has experianced several market cycles. The following thoughts (which are posted elsewhere on the web as well ) are Bob Farrell’s 10 Market Rules to Remember. He spent several decades at Merrill Lynch as a market strategist before retiring in 1992.

1) Markets tend to return to the mean over time.
2) Excesses in one direction will lead to an opposite excess in the other direction.
3) There are no new eras – excesses are never permanent.
4) Exponential rapidly rising or falling markets usually go further than you think, but they do not correct by going sideways.
5) The public buys the most at the top and the least at the bottom.
6) Fear and greed are stronger than long-term resolve.
7) Markets are strongest when they are broad and weakest when they narrow to a handful of blue chip names.
8) Bear markets have three stages – sharp down – reflexive rebound – a drawn-out fundamental downtrend.
9) When all the experts and forecasts agree – something else is going to happen.
10) Bull markets are more fun than bear markets.
Posted by Paul Dravis at 7:30 PM No comments:
Email ThisBlogThis!Share to TwitterShare to FacebookShare to Pinterest

Over the past few weeks, I have discussed with friends John Kenneth Galbraith's book "The Great Crash, 1929" which was published in 1955. While two market crashes will not be identical, there are some startling similaries between the dynamics leading up to the 1929 crash and today's situation.

For additional thoughts , check out the front page of today's New York Times Week in Review section. The article "Seeking a Poet for the Great Mess of ’08" focuses on Galbraith's book.
Posted by Paul Dravis at 8:20 AM 2 comments:
Email ThisBlogThis!Share to TwitterShare to FacebookShare to Pinterest
Newer Posts Older Posts Home
Subscribe to: Posts (Atom)