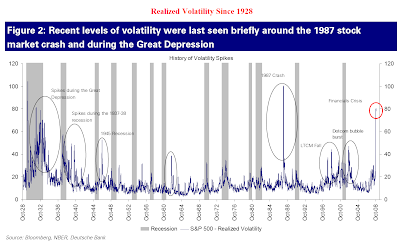 If the 1930s are a guide, volatility could persist. The volatility index for the S&P 500 (VIX) closed at 47 today.
(To enlarge the image, please click on it.)
Posted by Paul Dravis at 4:59 PM No comments:
Email ThisBlogThis!Share to TwitterShare to FacebookShare to Pinterest

The following video, from December 2008, is a presentation by Woody Brock, President and Founder of economic think tank, Strategic Economic Decisions at an Asset Allocation Summit conference in Vienna.

Video quality is poor (a bit out of sync), but the content is very good!

Dr. Horace “Woody” Brock specializes in the “Economics of Uncertainty” (originally developed by Kenneth J. Arrow of Stanford University) to forecast and assess risk in international markets. Dr. Brock earned his B.A., M.B.A., and M.S. from Harvard University, and his M.A. and Ph.D. from Princeton University (mathematical economics and political philosophy). He studied under Kenneth J. Arrow, Professor of Economics, and John C. Harsanyi, Professor of Economics, University of California, Berkeley, both winners of the Nobel Prize in Economics.