Is our world full of "black swan" events?

In his 2007 book “The Black Swan: The Impact of the Highly Improbable”, Nassim Taleb commented that the impact of hard-to-predict and rare events can shape society and that “Globalization creates interlocking fragility, while reducing volatility and giving the appearance of stability”. Since then, many events have reshaped the global economy into a less certain place.

MY TAKE: To the extent that uncertainty is now the norm, investors may begin to factor uncertainty into their processes. However, obtaining superior investment returns may require approaches that anticipate changes in asset price direction and are executed in a nimble and opportunistic fashion. If these strategies become more prevalent, market volatility will persist.

Posted by Paul Dravis at 5:11 PM No comments:
Email ThisBlogThis!Share to TwitterShare to FacebookShare to Pinterest

On Tuesday, North Korea bombed South Korea’s Yeonpyeong Island, which is located in the Yellow Sea just off the west coast of North Korea. The assault resulted in the death of four people and the destruction of dozens of homes. As the week progressed, South Korea’s defense minister resigned because he was not prepared for the attack and tensions in the region increased.

MY TAKE: North Korea is considered a “rogue nation” on the international scene and this action coupled with increasing concerns about its highly enriched uranium program is very unsettling. While South Korea has yet to initiate a strong response to the attack, news reports suggest additional military action may take place. Such action would likely increase the volatility in most global markets.

Posted by Paul Dravis at 5:09 PM No comments:
Email ThisBlogThis!Share to TwitterShare to FacebookShare to Pinterest

Black Friday - is the U.S consumer coming back?

With consumer spending accounting for about 70% of the U.S, economy, “Black Friday”, the start of the holiday shopping season, is a significant event to evaluate. While the media focused on pre-dawn openings at stores such as Best Buy Co. Inc. (US: BBY), Target Corp. (US: TGT), Macys, Inc. (US: M) and Wal-Mart Stores, Inc. (US: WMT), analysts are also assessing the “Cyber Monday” effect, which incorporates the impact of on-line sales.

MY TAKE: The U.S. Commerce Department reported that third quarter consumer spending increased at a 2.8 percent annual rate, the strongest since 2006. As a result, positive holiday sales would likely be well received by investors. However, holiday sales are one among many factors that determine the short-term tone of the global investment landscape.

Posted by Paul Dravis at 5:07 PM No comments:
Email ThisBlogThis!Share to TwitterShare to FacebookShare to Pinterest

Another wild week: markets zig down and then zig up

Last week, many markets moved down strongly on Tuesday, only to reverse in an equally strong positive direction on Thursday driven by a variety of positive and negative news. Investors, traders and speculators continue to react to 1) recent news headlines, such as European sovereign debt issues and concerns that economic growth in China may slow; 2) a broad array of economic statistics dealing with unemployment, consumer confidence, housing starts, foreclosures rates (some of which may be revised up or down at a later date) and 3) various technical indications: overbought, oversold, support, resistance, etc.

MY TAKE: Markets are likely to remain jittery with the economic news-flow driven by monetary and fiscal policy debates that include the assessment of austerity measures, entitlements cuts, and government bailouts; with an increasing focus on the future role of the U.S. Federal Reserve and central bankers. Expect volatility to persist.

Posted by Paul Dravis at 5:13 PM No comments:
Email ThisBlogThis!Share to TwitterShare to FacebookShare to Pinterest

On the Road with General Motors: An IPO Story

On Thursday, shares of General Motors (US: GM; Canada: GMM) began trading, after raising $23 billion in the largest initial public offering (IPO) in US history. With a history extending back to 1897, the timeline of this iconic American firm includes its high profile Tomorrow-land exhibit at the 1964 World Fair in New York, its critical treatment in Michael Moore’s 1989 film “Roger & Me” and its recent bailout by the US and Canadian governments which led some people to feel that GM stood for “Government Motors”. Viewed in a global context, GM is number two in vehicle sales in China (the world’s largest market for vehicles), behind Volkswagen and is number three in Brazil, behind Fiat and VW.
MY TAKE: During the two-week global road show for the IPO, there was great enthusiasm about this stock offering among investors. From an investment perspective, GM still has significant competitive threats from VW, Hyundai, Ford and other emerging players. Additionally, the firm must service substantial legacy pension obligations. For the U.S. government to recover its $50 billion investment, the U.S. Treasury Department has to sell its remaining 500 million shares at an average price of $53 (Friday’s close was $34.26). Please note: 98% of the shares purchased in the IPO were sold on the first day of trading – are there any long-term investors? The road ahead for GM could be tricky.
Posted by Paul Dravis at 3:20 AM No comments:
Email ThisBlogThis!Share to TwitterShare to FacebookShare to Pinterest

Is the tone of the global markets changing? 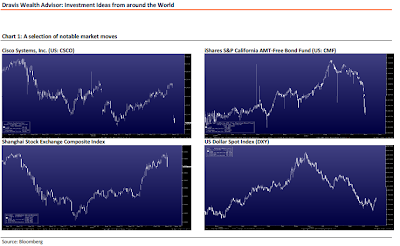 Since August, when the U.S. Federal Reserve suggested that more monetary stimulus was coming, most markets have moved in an investor-friendly fashion. More recently, concerns have been creeping back into the markets. Dynamics on the investment dashboard include sovereign debt issues in Ireland, a rising U.S. dollar against major currencies, potential interest rate increases in China to curb inflation, a sharp correction in the U.S. Municipal Bond market and a major sell-off in network equipment maker Cisco Systems, Inc. (US: CSCO) who noted weakness in government sector demand among its short term challenges.

MY TAKE: While these dynamics may present a “buy on weakness” opportunity, my Risk Monitor (which incorporates equity volatility and credit data from the US and European markets) leaned a bit more toward caution. As a result, I increased my hedged position, which may be just a short-term trade. Regarding the impact of economic stimulus efforts, I continue to be concerned. I hope that the road ahead is not similar to that of the drug addict – the first fix feels good, the follow-up fixes only result in feeling less bad.

Posted by Paul Dravis at 5:18 PM No comments:
Email ThisBlogThis!Share to TwitterShare to FacebookShare to Pinterest

Gee-whiz G-20, how about some straight talk!

The Group of Twenty (G-20) provides a forum for global leaders to discuss international financial system issues. Its members are finance ministers and central bankers from Argentina, Australia, Brazil, Canada, China, France, Germany, India, Indonesia, Italy, Japan, Mexico, Russia, Saudi Arabia, South Africa, South Korea, Turkey, United Kingdom, United States, the European Union along with representation from the World Bank and the International Monetary Fund. This past week’s meeting was held in Seoul, South Korea. Among the messages from this session, the confusing text “These indicative guidelines composed of a range of indicators would serve as a mechanism to facilitate timely identification of large imbalances that require preventive and corrective actions to be taken.”

MY TAKE: G20 meetings provide 1) great opportunities for group photos of world leaders, 2) a nice economic infusion of tourism and hospitality trade for the host location and 3) expectations that may be met with mixed results. This meeting delivered on all three points.

Posted by Paul Dravis at 5:16 PM No comments:
Email ThisBlogThis!Share to TwitterShare to FacebookShare to Pinterest

On Monday, the San Francisco Giants baseball team made history when they won their first World Series since moving to San Francisco in 1958. While the win took place at an away game against the Texas Ranges, our city instantly erupted into celebrations which continued through Wednesday when the team was welcome home to an amazing ticker tape parade.

MY TAKE: Here in San Francisco, it was an amazing week. Enhancing the moment was the ability to share it with our family and friends in Barranquilla Colombia where celebrations also occurred (this coastal city is the hometown of Edgar Renteria, the Giants Most Valuable Player for the series - his 3-run home run locked up the championship for the team). In addition, a World Series win is generally quite good for the local economy. Yahoo!

Posted by Paul Dravis at 5:50 PM No comments:
Email ThisBlogThis!Share to TwitterShare to FacebookShare to Pinterest

On Wednesday 3, the Federal Open Market Committee (FOMC) - a 12-member group of U.S. Federal Reserve members, announced that it would pump an addition $600 billion to the market to help improve the US economy. This action by the Fed had been anticipated since mid August. While many global markets rallied on this announcement, the news received mixed reviews internationally. Perhaps the harshest comments, presented in the Financial Times and Der Spiegel, come from Germany’s Finance Minister Wolfgang Schäuble who describes US policy as “clueless”, that its actions “increase the insecurity in the world economy” and “It is not consistent when the Americans accuse the Chinese of exchange rate manipulation and then steer the dollar exchange rate artificially lower with the help of their printing press”.

MY TAKE: Perhaps the more things change, the more they remain the same. In 1971, when responding to criticisms about US effort to devalue the dollar, then US Secretary of the Treasury John Connolly told global finance ministers “the dollar is our currency, but your problem”. If this view remains true today, conventional wisdom suggests that the Fed’s actions should continue to drive equity and commodity prices higher while driving the US dollar lower against most major currencies. However, these are not conventional times and global economic uncertainty remains. At a minimum, investors should assess how much of the “good news” has already been priced into the market since mid August, when markets started to move higher. Note: As G20 leaders meet in Seoul, South Korea this week, perhaps we will learn if Mr. Connolly’s comments remain applicable in today’s environment.