Economic data and messages are mixed. At a two-day summit in Deauville, France last week, G-8 leaders from Canada, the European Commission, France, Germany, Italy, Japan, Russia, the United Kingdom and the United States released a statement that said, “the global recovery is gaining strength and is becoming more self-sustained. However, downside risks remain, and internal and external imbalances are still a concern," and added “the sharp increase in commodity prices and their excessive volatility pose a significant headwind to the recovery.” Separately, in the U.S, 1) the National Association of Realtors announced that April pending home sales declined by 11.6% from the prior month (a 0.9% decline was expected) and by 26.5% from last year, 2) the Commerce Department reported that first quarter GDP growth was weaker than expected – at 1.8%, 3) the Labor Department reported that jobless claims for the week ending May 21 unexpectedly increased by 10,000 to 424,000 and 4) the University of Michigan Consumer Sentiment Index report for May showed unexpected improvement with a rating of 74.3.
MY TAKE: The message from the summit does not seem reassuring and suggests that - things are getting better, unless they get worse. In addition, most of the U.S data suggests an economic slowdown – many strategists are calling it a “soft patch”. It seems that the expected benefits of the QE2 stimulus process are not reaching the broader U.S. economy and increases in fuel and food commodity prices, high unemployment and housing related issues are hindering a sustained recovery.
Posted by Paul Dravis at 12:04 PM No comments:
Email ThisBlogThis!Share to TwitterShare to FacebookShare to Pinterest 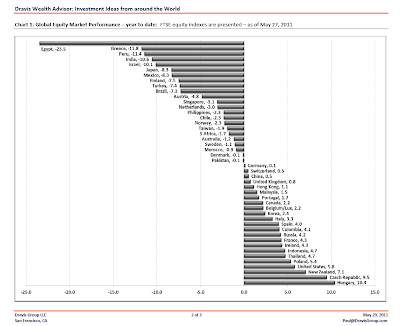 Last week, I commented that while many global markets have benefited from strong corporate profit growth, an accommodating credit market and the effects of QE2, most of my market indicators were suggested a more cautious investment approach as signs of economic stress were increasing in both the U.S. and Europe. The cautious market tone increased this past week.
MY TAKE: Investing is a dynamic and ongoing process that incorporates a diversity of tactics. Understanding the potential impact of market changes, managing risk and executing your strategy are critical components. In the short term, I remain cautious.
Posted by Paul Dravis at 11:58 AM No comments:
Email ThisBlogThis!Share to TwitterShare to FacebookShare to Pinterest

During the past eight months, strong corporate profit growth, an accommodating credit market and the effects of QE2 provided an investor friendly environment in many markets. Recently, there are signs of increased economic stress in both the U.S. and Europe, while elevated levels of inflation are challenging many emerging markets. This past week, firms reducing their forecasts included retailers The Gap Inc. and Aeropostale, Inc. Additionally, Gregg Steinhafel, CEO of Target Corp. said "while the U.S. economy is showing some signs of improvement, we expect the recovery will continue to be slow and uneven, particularly for more moderate-income households," and suggested a "need to see further improvements in housing and income growth before they'll have the capacity to meaningfully increase their discretionary spending."

MY TAKE: Investing is a complex process that requires assessing a broad array of economic data and investor behavioral trends. Many of the market indicators I monitor, including global equity, volatility, commodities, credit default swap and currency indexes suggest maintaining a cautious investment approach at this time.

Posted by Paul Dravis at 4:00 PM No comments:
Email ThisBlogThis!Share to TwitterShare to FacebookShare to Pinterest

Thoughts on the LinkedIn IPO and its $8.8 billion valuation

After LinkedIn Corp. (US: LNKD) management shared their story with institutional investors over the past several weeks (the firm's 2010 revenue was $243 million, up about 100% from 2009, with net income of $15 million), investment bankers from Morgan Stanley, JP Morgan Chase and Bank of America priced the firm's shares at $45 a share. On Thursday, LinkedIn shares started trading and rose to an intraday high of $129. On Friday, the stock closed at $93.

MY TAKE: Regarding the stock, it is likely that 1) many institutional investors sold their allocation this week, 2) some individual investors who bought shares on Thursday are wondering why and 3) momentum traders and potential short sellers will likely drive short-term stock moves. Regarding the company, it benefits from 1) its global Internet reach, 2) a strong brand and 3) a service that many people understand and use. Debates will continue about whether the underwriters priced the offering too low and if the stock can sustain its current price. The firm's execution will have to be flawless to support its current $8.8 billon valuation.

Posted by Paul Dravis at 3:54 PM 4 comments:
Email ThisBlogThis!Share to TwitterShare to FacebookShare to Pinterest

Is the U.S. dollar at an “inflection point”?

Often U.S. government officials talk about the desire for a “strong dollar”. However, assessing if a currency should be “strong” or “weak” relative to the value of other foreign currencies is a complex topic. In recent months, a declining U.S. dollar has helped increase U.S. exports, while reducing the amount of goods imported from other countries – a situation that helps create jobs and improves the trade balance. This week, the value of U.S Dollar increased by 1.5% versus the Euro and by 1.2% against a basket of major foreign currencies.

MY TAKE: When the U.S. Federal Reserve started its QE2 stimulus efforts last fall, the value of equities and commodities increased, while the value of the U.S. dollar declined. Today, investors must consider 1) the implications of the end of the QE2 stimulus process and 2) economic challenges outside of the U.S., such as increased concerns about the stability of the Eurozone “peripheral countries”. These dynamics have the potential to increase the value of the U.S. dollar. If this occurs, investors, companies and governments around the world will have to adapt their strategies to this new market environment. Note: In the short term, many currencies trade on technical considerations. The current move suggests that a fundamental change may be underway.
Posted by Paul Dravis at 2:59 PM No comments:
Email ThisBlogThis!Share to TwitterShare to FacebookShare to Pinterest

Risk-on or risk-off; bullish or bearish - what happens next?

In recent weeks, the tone among investors has become more cautious. Their list of concerns include 1) what happens at the end of QE2, 2) the volatility in commodity prices, 3) the potential of a "double-dip" U.S. housing, 4) a decline in the price of Copper since mid-February and 5) inflation remains at elevated levels in various regions of the world. With increasing concerns of "stagflation" - where inflation is high and economic growth is low, many investment strategists are positioning for a bumpy ride over the summer months.

MY TAKE: It seems that a prudent approach to the markets is warranted. At times like this, consider the words of investor Ken Fisher from several years ago - "the market is 'The Great Humiliator' that lives for the one sole purpose which is to humiliate as many people as possible for as many dollars as possible for as long as possible".

Posted by Paul Dravis at 1:30 PM No comments:
Email ThisBlogThis!Share to TwitterShare to FacebookShare to Pinterest

It was a rough week for investors, traders and speculators

Significant weekly declines in commodity markets included: Silver - 25.6%, Brent crude oil - 14.7%, WTI crude oil -13.3%, Copper -4.9%, Corn - 4.9%, and Gold -4.4%. Global equity market declines included: the U.S. - 1.7%, EuroStoxx -0.9%, Brazil -2.5%, China -1.7%, India -3.5% and Russia - 4.7%. At the same time, the U.S. Dollar, which has steadily dropping in value against most major currencies since mid-January, reversed this trend and finished the week +2.7%. Economic data likely driving some of these moves include: 1) a confusing mix of U.S. employment data where initial unemployment benefit claims unexpectedly increased to 474,000, while payrolls expanded by 244,000, but unemployment increased to 9%, 2) the Reserve Bank of India increased interest rates to manage inflation and 3) rising concerns about how the European Central Bank will address the challenges of Eurozone members - Ireland, Portugal and Greece, while also managing inflation.

MY TAKE: The bull case view in the pullback of many commodities prices suggests that a significant economic headwind is diminishing. A more pragmatic view is that as margin requirements increased in silver trading some market participants were forced to reduce positions - a process that likely increased the level of caution in other commodity markets. In my April 28 note, I suggested that a reversal in the downward trend of the U.S. dollar could be disruptive to equity and commodity markets. Many investors will be focusing on the potential impact if this past week's U.S Dollar reversal continues.

Posted by Paul Dravis at 3:37 PM No comments:
Email ThisBlogThis!Share to TwitterShare to FacebookShare to Pinterest

On May 6, 2010, as global markets were concerned about the debt crisis in Greece, U.S. equity markets dropped about 9% within 5 minutes. Over the past year, U.S. government regulators have implemented procedures to minimize the potential of another "flash crash" but concede that much work remains to be done in this area.

MY TAKE: Concerns persist in an environment where 1) exchanges are increasingly dependent on the revenues of high-frequency trading operations, 2) the U.S. Securities and Exchange Commission (similar to many government agencies) is suffering from budgetary constraints and 3) the expanding use of technology will likely continue to result in unexpected problems. Note: There are concerns that some of the downward move in commodity prices this week was exacerbated by the use of computerized systems.

Posted by Paul Dravis at 1:00 PM No comments:
Email ThisBlogThis!Share to TwitterShare to FacebookShare to Pinterest

A U.S. economic update: have the markets and economic fundimentals diverged??

During a press conference last week, Federal Reserve Chairman Ben Bernanke said "unemployment remains quite high, particularly among minorities, the young and those with less education," and "the foreclosure rate remains very high, and many homeowners who have avoided foreclosure find themselves 'under water". Additionally, the U.S. Commerce Department reported that economic growth dropped to 1.8% in the first quarter - down from 3.1% during the fourth quarter of 2010; and the U.S Labor Department reported that unemployment claims increased for the week ending April 23.

MY TAKE: The forward outlook will likely be driven by 1) the direction of oil prices (the Fed believes the current upward trend is "transitory"), 2) how Congress manages budget related issues and 3) the impact of adding 1.8 million homes that are delinquent or in foreclosure into a market where 3.5 million existing homes are currently for sale. Note: As the U.S. Congress debates the budget, debt ceiling and other fiscal issues, please be aware that Federal subsidies, employment and spending have historically been significant contributors to U.S. economic growth. Altering this trend will likely present challenges.