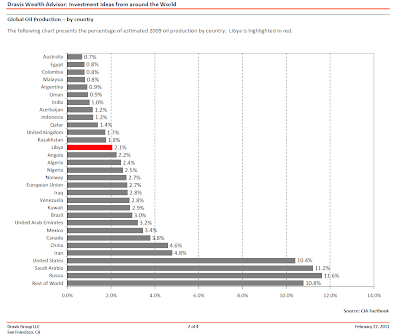 As tensions rose in Libya, a country with significant oil reserves in Africa, so did the price of oil – up 11.3% for the week. Libya’s longtime leader Muammar Qaddafi shared the following comments to supporters in Tripoli “When needed, all the weapons stores will be opened so that all the Libyan people and the Libyan tribes are armed,” and “Libya will become a fire.” According to Oppenheimer analyst Fadel Gheit, oil producers with exposure to Libya include Hess Corp. (US: HES) with 7.5% of production in Libya, Marathon Oil Corp. (US MRO) 16.8%, ConocoPhillips (US: COP) 7% and Occidental Petroleum Corp. (US: OXY) 2.4%.

MY TAKE: For several weeks, events in the Middle East and North Africa have been unpredictable. Additionally, many companies have been warning that higher fuel and commodity costs could negatively affect profits while driving inflation trends. The industry most sensitive to energy costs is transportation, with airlines feeling the greatest impact. Oil importing countries, such as the U.S., would be negatively impacted by sustained levels of higher fuel costs as well. Note: while the U.S. is a leading oil producer – delivering about 10% of global production, it consumes about 21% of global production.

Posted by Paul Dravis at 5:05 PM
Email ThisBlogThis!Share to TwitterShare to FacebookShare to Pinterest