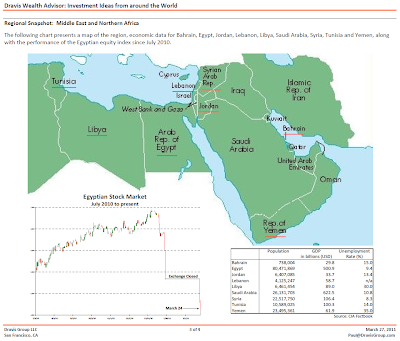 This week, Syria joined the list of other Middle East and North African nations (Bahrain, Egypt, Jordan, Lebanon, Saudi Arabia, Tunisia and Yemen) where protestors have marched against their government. In addition, the Egyptian Stock exchange, which shut down on January 27 after several days of steep declines associated with political instability, reopened this past Wednesday. The result - Egypt's equity market continued to decline to its lowest level since April 2009 - down 27% for the year.

MY TAKE: Political and economic instability in the MENA region is likely to negatively affect a broad array of industries in the short to medium term. However, the Egyptian market may stabilize soon as the government takes supportive actions - this may be a reasonable barometer to gauge its economic recovery.

Posted by Paul Dravis at 4:27 PM
Email ThisBlogThis!Share to TwitterShare to FacebookShare to Pinterest